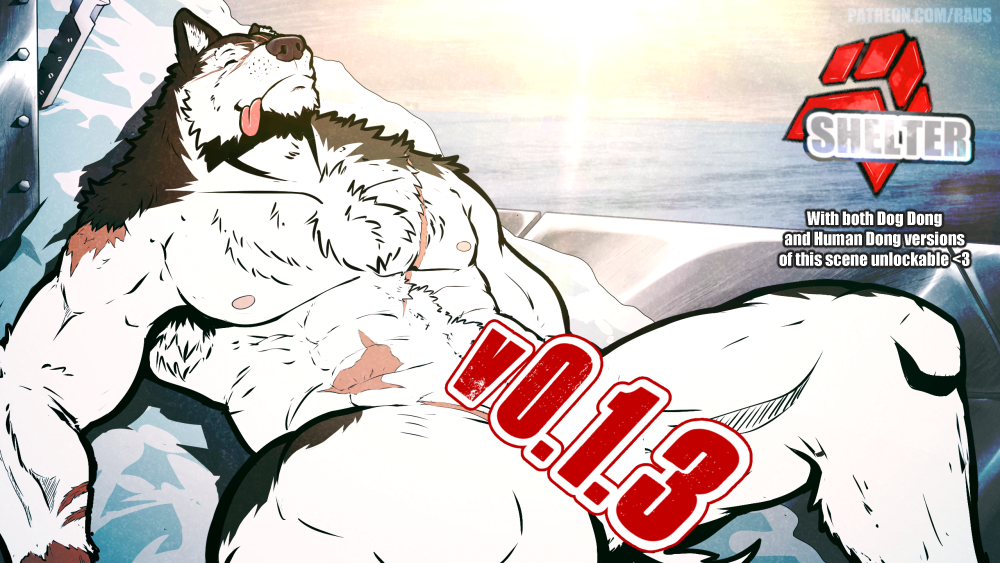 A hefty update in Shelter this month! It introduces the first dirty CG scene into the game... among many other things <3
So, the list of new things:

> the "listen to the the prospectors" scene implemented! With a bunch of routes in it!

> a full unlockable dirty CG scene with Rune. Character and the pose for the scene were decided by the supporters on Patreon

> an unlockable FULL ALTERNATIVE HUMAN DONG VERSION of that dirty scene with Rune, with different art and script! I put it as a sample of what to expect if we decide to implement "Human Dong" mode into the game in the future.

> topless and naked body sprites for Rune and Teak. A grumpy expression for Max.

For the next update we're finally going outside of the tavern so we're gonna see a bit more of the Shelter. I'm working on some new backgrounds right now!
Also, we hit a goal on Patreon where I promised yet another CG scene so I'm gonna make some polls soon and we'll see what dogs will get their CG next and in what kind of situations :]

If you'd like to support me and play the next build as soon as it's out, check out https://www.patreon.com/raus and follow me on https://twitter.com/rausmutt

By a single pledge to my Patreon on any tier you also get an access to our Discord server!

NSFW Visual Novel about medieval fantasy dogs and a hooman

So how do you unlock the Rune CG? I'm replying the game blindly a few times now and nothing

Don't whack him in the head in the morning

My! Your art work is Absolutely Beautiful!

Exited for the next Update! (UwU )

I can't wait to see more Burry! Wonderful update and I wish you the best! x

Thank you! I want to show more Burry and finally give Alon his own scene as soon as I can. :)

Thanks for the update! Love it!